UPDATE:The Rolling Stones have released official audio of their intimate Fonda Theatre show last month. The show was the first time the band played their landmark album Sticky Fingers in its entirety.

The Rolling Stones previewed their upcoming Zip Code tour with a surprise concert Wednesday night at L.A.’s tiny Fonda Theatre, where they played their classic 1971 album Sticky Fingers in its entirety for the first time ever. The group is reissuing that record in a variety of formats, including rarities-packed deluxe box sets, next month. Wednesday’s gig marked the first time the band played deep cut “You Gotta Move” in close to four decades, along with other rarely performed Sticky Fingers tunes “Sister Morphine” and “I Got the Blues.” The group will kick off the tour officially on May 24th in San Diego.

Video from the concert shows the band playing the album’s “Brown Sugar” and “Moonlight Mile,” the latter of which features Mick Jagger on guitar, as well as some of the famous faces in the audience. Jack Nicholson, Harry Styles, Leonard Cohen, Bruce Willis, Patricia Arquette, Eric Idle, Don Was and Joe Pesci were all in attendance.

Earlier this year, Jagger told Rolling Stone he had mixed emotions about playing Sticky Fingers in full. “Sticky Fingers has, like, five slow songs…. I just don’t know how it would work,” he said. “Maybe we’d play it and everyone would say, ‘Great.’ But maybe they’ll get restless and start going to get drinks.” 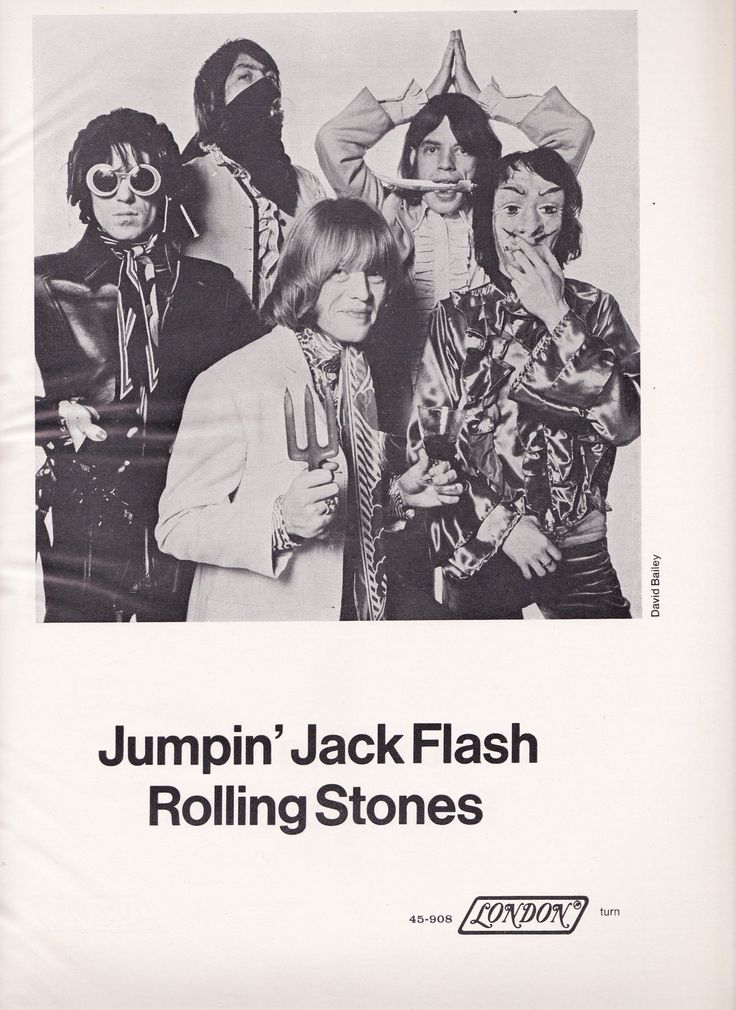 Beyond Sticky Fingers, the band played hits (“Start Me Up,” “Jumpin’ Jack Flash”), fan favorites (“All Down the Line,” “When the Whip Comes Down”) and some covers, the most notable of which was B.B. King’s “Rock Me Baby.”

Jagger recently mourned the loss of King, who died earlier this month, in a Twitter Q&A with fans. “It’s sad,” he wrote. “He had such a huge, long career. It’s sad that we won’t be listening to him live anymore.”

'Jumpin' Jack Flash' is a song by English rock band the Rolling Stones, released as a single in 1968.[4] Called 'supernatural Delta blues by way of Swinging London' by Rolling Stone magazine,[6] the song was perceived by some as the band's return to their blues roots after the baroque pop and psychedelia heard on their preceding albums, Aftermath (1966), Between the Buttons (1967) and especially Their Satanic Majesties Request (1967).[3][7] One of the group's most popular and recognisable songs, it has featured in films and been covered by numerous performers, notably Thelma Houston, Aretha Franklin, Tina Turner, Peter Frampton, Johnny Winter and Leon Russell. To date, it is the band's most-performed song: the band has played it over 1,100 times in concert.[8]

Written by Mick Jagger and Keith Richards, recording on 'Jumpin' Jack Flash' began during the Beggars Banquet sessions of 1968. Regarding the song's distinctive sound, guitarist Richards has said:

I used a Gibson Hummingbird acoustic tuned to open D, six string. Open D or open E, which is the same thing – same intervals – but it would be slackened down some for D. Then there was a capo on it, to get that really tight sound. And there was another guitar over the top of that, but tuned to Nashville tuning. I learned that from somebody in George Jones' band in San Antonio in 1964. The high-strung guitar was an acoustic, too. Both acoustics were put through a Philips cassette recorder. Just jam the mic right in the guitar and play it back through an extension speaker.[5]

Richards has stated that he and Jagger wrote the lyrics while staying at Richards' country house, when they were awoken one morning by the clumping footsteps of his gardener Jack Dyer walking past the window. Surprised, Jagger asked what it was and Richards responded: 'Oh, that's Jack – that's jumpin' Jack.'[9] The lyrics evolved from there.[5][10] Humanities scholar Camille Paglia[11] speculated that the song's lyrics might have been partly inspired by William Blake's poem 'The Mental Traveller': 'She binds iron thorns around his head / And pierces both his hands and feet / And cuts his heart out of his side / To make it feel both cold & heat.'

Jagger said in a 1995 interview with Rolling Stone that the song arose 'out of all the acid of Satanic Majesties. It's about having a hard time and getting out. Just a metaphor for getting out of all the acid things.'[12] And in a 1968 interview, Brian Jones described it as 'getting back to ... the funky, essential essence' following the psychedelia of Their Satanic Majesties Request.[7]

In his autobiography, Stone Alone, Bill Wyman has said that he came up with the song's distinctive main guitar riff on a piano without being credited for it.[5] In Rolling with the Stones, Wyman credits Jagger with vocals, Richards with guitar and bass guitar, Brian Jones with guitar, Charlie Watts with drums and himself with organ on the track with producer Jimmy Miller adding backing vocals.

According to the book Keith Richards: The Biography by Victor Bockris, the line 'I was born in a crossfire hurricane', was written by Richards, and refers to his being born amid the bombing and air raid sirens of Dartford, England, in 1943 during World War II.

Live version from Get Yer Ya-Ya's Out!

'Child of the Moon'

Released on 24 May 1968, 'Jumpin' Jack Flash' (backed with 'Child of the Moon') reached the top of the UK Singles Chart[4] and peaked at number three in the United States. It topped the US Cashbox chart for one week.[13] Some early London Records US pressings of the single had a technical flaw in them: about halfway through the song's instrumental bridge, the speed of the master tape slows down for a moment, then comes back to speed. The first Rolling Stones album on which the song appeared was their 1969 compilation album, Through the Past, Darkly (Big Hits Vol. 2), one year after the single was released. Since then, it has appeared on numerous Stones compilations, including Hot Rocks 1964–1971 (1971), 30 Greatest Hits (1977), Singles Collection: The London Years (1989), Forty Licks (2002), GRRR! (2012) and Stray Cats, a collection of singles and rarities included as part of The Rolling Stones in Mono box set (2016).

The Rolling Stones have played 'Jumpin' Jack Flash' during every tour since its release. It ranks as the song the band has played in concert most frequently,[14][15] and has appeared on the concert albums Get Yer Ya-Ya's Out! (recorded 1969, released 1970), Love You Live (recorded 1976, released 1977), Flashpoint (recorded 1990, released 1991), Shine a Light (recorded 2006, released 2008), Hyde Park Live (2013), Totally Stripped (recorded 1995, released 2016), and Havana Moon (2016), as well as, notably, The Rolling Stones Rock and Roll Circus (recorded 1968, released 1996), featuring the only released live performance of the song with Brian Jones. Unlike most of that show, Jones is heard clearly, mixing with Richards's lead throughout the song. The intro is not usually played in concert and instead the song begins with the main riff. The open E or open D tuning of the rhythm guitar on the studio recording has also not been replicated in concert (with the possible exception of the 1968 NME awards show, no recording of which has ever surfaced). In the performance filmed for The Rolling Stones Rock and Roll Circus in December 1968, Richards used standard tuning; and ever since the band's appearance at Hyde Park on 5 July 1969, he has played it in open G tuning with a capo on the fourth fret. Richards is particularly fond of the song's main riff, often crediting it as his favorite among all of his most revered guitar riffs.

Two promotional videos were made in May 1968: one featuring a live performance, another showcasing the band lipsyncing, but with Jagger singing a clearly different vocal. And all wearing makeup. In 1986, the song's title was used for the Whoopi Goldberg film Jumpin' Jack Flash. In addition to the Rolling Stones' version of the song, the film features Aretha Franklin's cover version for which Ronnie Wood and Richards played guitar, but Franklin played piano. This version is characterised by influences from the popular black music scene. Only the Rolling Stones' version is on the film's original soundtrack recording.

A number of other artists have also performed and recorded versions of the song: